Directing for a Drama Series
Will Win/Should Win - Martin Scorsese "Boardwalk Empire - Pilot"
Could Win - Tim Van Patten "Game of Thrones - Winter is Coming"
Commentary - Now that it is clear that the Emmys are not big fans of Game of Thrones (big enough to nominated it, but it lost some easy categories last night), I think that its chances of winning this award have reduced dramatically. So I think that with ease that the great Martin Scorsese will easily win this award, because even though Boardwalk Empire lost some steam, its Pilot was flashy, well-made, and a great start for the series, which all looks good for Scorsese. 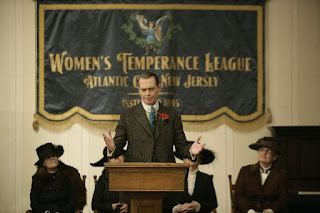 Directing for a Comedy Series
Will Win/Should Win - Michael Alan Spiller "Modern Family - Halloween"
Could Win - Beth McCarthy-Miller "30 Rock - Live Show"
Commentary - While the technical impressiveness of Live Show may get 30 Rock the award, I think that the Academy has moved past it, and with three nominations, I think Modern Family has got this one in the bag. Of the three Halloween is the best episode, and I think the consensus to take this award.

Directing for a TV Movie/Miniseries
Will Win - Todd Haynes "Mildred Pierce"
Should Win - Olivier Assayas "Carlos"
Could Win - Brian Percival "Downton Abbey Part 1"
Commentary -  With the shocking losses it took last night, I am now not as confident of Mildred Pierce's chances of sweeping the big awards. That being said, I will stick with Todd Haynes, because sometimes losing creative awards, doesn't mean that the other brances won't appreciate it. I personally would go for Carlos' hemler Olivier Assayas, but I think that if anyone upstages Pierce it is Brian Percival for Downton Abbey which could be the big spoiler of the night
Posted by Andrew at 6:03 PM