As I left the theater after seeing a matinee of Drive, I heard rumblings from the audience that they were disappointed, and I couldn't help by chuckle. Not because I think they are unfounded in disappointment, but because I think they were simply not prepared for the experience, thinking they were seeing Fast and Furious. However, I knew what to expect from Nicholas Winding Refn, and his crew, and unlike my fellow audience members I was not disappointed. 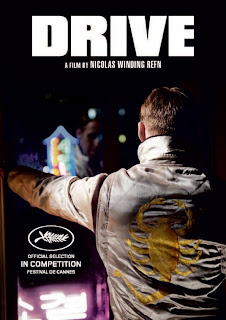 Ryan Gosling's character never gets a name, and is simply credited as Driver, a young stunt driver who works in a shop for extra money, as well as drives get away cars for criminals. His friend from the shop Shannon (Bryan Cranston), hooks him up with two mobsters Bernie and Nino (Albert Brooks and Ron Perlman) for him to become a professional racer. In the meantime, he meets a young mother Irene (Carey Mulligan) who's husband is in jail. Upon the husband's return, he must repay protection money, so Driver decides to help him because he has fallen for both Irene and her son, and feels the need to protect them by helping put the husband's debts behind him. However, as the job goes horribly wrong, (which features Christina Hendricks), Driver begins to get deeper and deeper into the crime world of Los Angeles, and finds it difficult to pull out of it.

Knowing Refn's work it was not surprising how stylized this film was. This is not a classic, constantly moving action film. Instead it fills its intermediate spaces with long gazes, ethereal score and soundtrack, character development, and then it hits you with hyper-violent bursts that shock you. While this may not be the ideal way to make an action film, it manages to work. It is a film that stimulates the senses, develops characters, yet keeps them at a distance, so that it is not ever too emotional or too involved. And while the storyline is not a conventional narrative, its sequence of events make the overall effect linger with you long after, and it makes you think.

But Refn's style and skill are not the only components of this film that work, as the cast is simply stunning, and even if the source material, like the incrediblely ambitious, yet minimalistic script that allows for the director and cast to flourish, were for some reason bad (which they are not), the performances alone would have ensured critical success. Ryan Gosling is steady, secure, and unwavering in a controlled manner, that while subtle in many ways, is so precise and meticulous that you are engaged throughout the entire film. This steadiness also makes the spurts of violence even more shocking and breathtaking when they do eventually hit. But Gosling is not alone, as Cranston provides some humanity, and Carey Mulligan provides emotional heft in ways that are certaintly award worthy. But it is Albert Brooks who, although not seen much in the film, manages to steal every scene he is in with his villanous and explosive Bernie, who brings a calmness and relaxed fit to a monster. It is nice to see Brooks go outside his comedic style, and he has officially placed himself in the Best Supporting Actor race.

Drive is an incredibly stylish and well-made heist thriller that manages to avoid action cliches and features some sharp and stunning performances, as well as a zipping script that manages to tell the story, while being minimalistic, allowing for creative flourishes. Now, Drive is not for everyone, and there are moments where the style causes the film to slow down a little too much. But overall, it manages to overcome its miniscule flaws to become a heart-pounding film that really effects you if you let your populist guard down and simply absorb it.