So early word is pretty good for the adaptation of the beloved novel Tinker, Tailor, Soldier, Spy. I am personally excited for this film, and think it is about damn time that Gary Oldman start to get some Oscar attention. Here are some early reviews:

Xan Brooks from The Guardian (UK):

"A marvellously chill and acrid cold war thriller from Swedish director Tomas Alfredson. Right here, right now, it’s the film to beat at this year’s festival…. Nimbly navigating the labyrinthine source novel by John Le Carré, Alfredson eases us through a run-down 70s London, all the way to a municipal MI6 bunker, out by the train yards… Oldman gives a deliciously delicate, shaded performance, flitting in and out of the wings like some darting grey lizard." 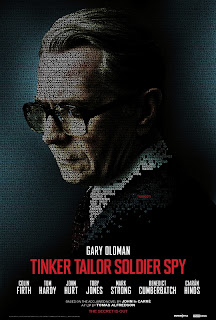 Deborah Young from The Hollywood Reporter:
"It is one of the few films so visually absorbing, felicitous shot after shot, that its emotional coldness is noticed only at the end, when all the plot twists are unraveled in a solid piece of thinking-man’s entertainment for upmarket thriller audiences…With the Cold War long gone and other problems to worry about on the world political scene, Tinker Tailor risks feeling out of date and superfluous. Alfredson’s solution has been to celebrate the period and its rigidity in a stylish feast of modernism designed by Maria Djurkovic and lit by Hoyte van Hoytema."
Oliver Lyttelton from The Playlist:

"Alfredson appeared to be a major talent after Let The Right One In, and he exceeds his break-out here, never letting the style get in the way of the storytelling (as happened once or twice in the vampire film), while retaining an impeccable eye for period. The greys and browns that dominate the film—thanks to sterling work from DoP Hoyte van Hoytema—perfectly capture the grim days of 1970s Britain, and the attention to detail displayed is really quite extraordinary, every set and backdrop adding texture to the action… Alfredson revels in the analogue quality enabled by the setting, lingering on details of paper and tape in a computer-free world."
Posted by Andrew at 9:21 PM