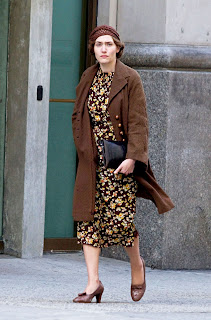 Commentary - This has some great nominees, although unless something shocking happens, I think most of them are simply seat fillers. Although I didn't particularly care of Taken From Me as a whole, I did appreciated and like Taraji P. Henson's performance. So although I am glad she god nominated, I don't think there is any chance of her winning. I also think Jean Marsh for Upstairs, Downstairs is out, which is kind of surprising, but if some one is going to take the prize from a British production it is going to be Elizabeth McGovern. This is a serious possibility considering Downton Abbey is starting to sneak up on Mildred Pierce and could pull a surprise attack. I also think that Diane Lane in the underappreciated Cinema Verite has a shot, simply because her performance was praised upon its release. However, despite some stiff competition, despite a sudden loss in enthusiasm for Mildred Pierce's chances, I don't think there is anyone who can really beat Kate Winslet. She is movie royalty, an Academy Award winner, and is simply stunning in Pierce.
Posted by Andrew at 9:34 AM