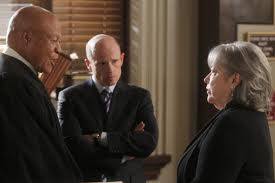 Commentary -  Every pundit in the world is predicting Michael J. Fox to win this award, because he is an Emmy legend, and the role was so buzzed going into this race. But let's not forget the importance of viewing the episode submissions. Because in terms of the best performances, he is in the third slot. That being said, he has a very good shot at winning, and it would not surprise me if he did. It would surprise me if either Bruce Dern or Robert Morse won, not because they don't do a great job, but because neither of their episodes are as strong as some of the other contenders. Beau Bridges probably has an outside shot, because he is heavily involved in his episode, but to me he seems to be acting like, well, Beau Bridges. Since their isn't a lot of range, and the show is now off the air, I don't know if his name recognition will be enough. So in my mind it comes down to two (plus Fox of course). Jeremy Davies' role is a bit more subtle than his nearest competitors, but if the panel of actors looks at this episode closely they are going to see just how brilliant he was in this role, and it may get him an Emmy. That being said, I think that the out of nowhere nominee Paul McCrane is actually going to win. A lot of people have him in their sixth slot, which is completely asinine if you ask me. His episode is fiery, a bit over the top, but the kind of legal episode that has rewarded so many actors in the recent past (think about the Boston Legal guys). Plus, this is a David E. Kelly show. Love them or hate them, they are popular, and they get their actors Emmys. Some of you may not be convinced yet, but I think Paul McCrane might send shockwaves through Hollywood when he wins this award this Sunday at the Creative Arts Emmys.
Posted by Andrew at 5:50 PM