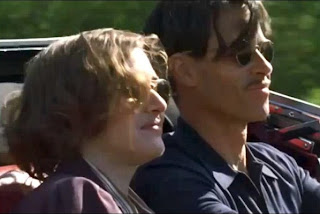 Commentary - So yes, all five men are mentioned in the little blip above. But here is how I see things really going down. Brian F. O'Byrne's performance was understated to say the least, but it registered with me as much as some of the louder performances in the miniseries. That being said, I don't think that he has even a shot at winning, which is really sad. I personally thought The Kennedy's was a disappointment (not because of the politics, but because I just didn't think it was that good as a program), but The Emmys clearly disagreed, making Tom Wilkinson a dark horse to win this, between his high profile role, and veteran status. Both of the Two Big to Fail guys have a lot of potential as well, as both Giamatti and Woods "actor's actors". But I think internal competition might hurt them, and both performances are great on their own merits, so its hard to pick one of the two. So with all that I am going with Guy Pearce for several reasons. First, he is very good in Mildred Pierce, and holds his own against some powerful female characters. Second, the Emmys clearly have a love affair with the Todd Haynes affair, and if there is a sweep I see no reason Pearce doesn't get swept up in it. While I legitimately think that four of these guys have a shot, they are going to need some major push on the panels to overcome Pearce.
Posted by Andrew at 11:35 PM