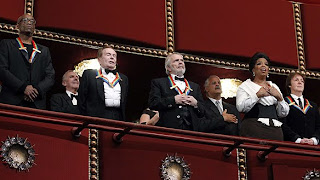 Commentary - This one seems to be evenly split among pundits between two specials. While I think Midler could actually win this, it seems she is currently in third place with Wishful Drinking and Pee-Wee Herman bringin up the rear. A lot of people are going with Gaga, and its actually not a bad pick. She is uberly popular, her show is definitely the most entertaining and fascinating of the five, and it would look chic for the Academy to honor her. But honestly, I don't know if they are hip and chic enough to go out on a limb with someone as eccentric as Lady Gaga. I think they will instead play it safe and go with The 2010 Kennedy Center Honors. It too is entertaining, and it honors legends, which, lets face it, the Academy will eat up.
Posted by Andrew at 1:01 PM