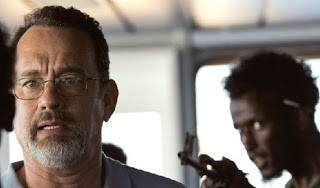 Commentary - There are some names like Tom Hanks as Walk Disney in Saving Mr. Banks, and Bruce Dern in Nebraska that seem to be borderline lead and supporting, so for now I am leaving them out. That being said, I still think that Tom Hanks will get in, maybe for his role in Paul Greengrass' Captain Phillips. If he splits his campaign, he could get two acting nominations this year. The two actors that seem to be on the rise are Chiwetel Ejiofor, after the 12 Years a Slave trailer made it look much more Academy friendly than McQueen's previous efforts, and Matthew McConaughey, who is getting early rave buzz for his work in Dallas Buyer's Club. This means that some big contenders are not currently predicted including names like Christian Bale, George Clooney, Forest Whitaker, Idris Elba, and upstart Michael B. Jordan. In the last two slots I am going to play it a little safe. Leonardo Dicaprio has never had Oscar nominations come easy to him, but he looks excellent The Wolf of Wall Street. Finally, in an almost silent role, Robert Redford is said to light up the screen in JC Chandor's All is Lost. Chandor's lsat effort earned a screenplay nomination, so he is now on the Academy's radar. And Robert Redford is a an Academy Award winning film legend, who has never managed to win for acting. This touching role could be his ticket.