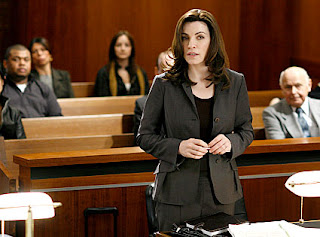 Commentary - There are only two solid locks in this category, and those are recent winners Claire Danes and Julianna Margulies. Other than that his race is a complete mess, and there is a good chance I do very poorly on my predictions come Thursday morning. I think that the rest of the returning stars are all in trouble, and, despite my better judgment, I am leaving out the legend Glenn Close. This is probably not a smart move, but I think that there is enough competition to bump out the long-forgotten Damages from all categories, including this one. Both Michelle Dockery and Elisabeth Moss are popular actress, but neither had great seasons compared to some of the ladies who are still beyond the six. That being said, I think there is enough good will left from both of their shows to carry them back into the race. That leaves two slots (Close out and Harry's Law cancelled). I think that Kerry Washington has had a hell of a year. She won like eight Image Awards, had a role in the Oscar-winning film Django Unchained, was politically active even speaking at the DNC in Charlotte, and saw her show Scandal become one of the biggest shows on broadcast television. I'm still a little worried that many Emmy voters have avoided Scandal because it is definitely a guilty pleasure, but I think that the rise and popularity of Kerry Washington as an actress, person, and activist will be enough to get her her first Emmy nomination. The last slot is a bit tricky. I personally think that Keri Russell and Robin Wright (along with Close) should both get in, but I'm just not sure if both can. While Russell has been working hard on television for a long time, Wright holds her own against Kevin Spacey, and is (along with Close), the movie star of the bunch. I have no confidence in this pick , and it will probably be changed come Wednesday, aka final list day, but I think that Wright will make the cut and Russell will be left out.