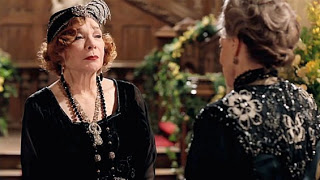 Commentary - This year, two Oscar-winning legends contributed their talents to two of television's top shows. The first is the recurrance of Jane Fonda on The Newsroom. She was fierce, and definitely has enough material to make the cut, plus she's Jane Fonda. The other as Shirley MacLaine as the American mother on Downton Abbey. I was slightly disappointed with the appearence, because I felt that Fellowes did not give her enough material, but she still made a splash, and will probably be rewarded for it. From there it is probably anyone's guess as to who makes the cut. The Good Wife has so many names to submit, that it will be hard to choose. I would love to see Carrie Preston get in, which is definitely a possibility, but I think that two other actresses will make the cut instead. Martha Plimpton surprisingly won last year for her always-scene stealing role, and she is clearly well-liked among the Academy. The other is Stockard Channing, who is not only great, but seems to be one of those actresses who, if her name is on the ballot, she gets nominated. The last two slots are tricky. With the Argo campaign team behind Mad Men (a sign of desperation if you ask me), some of its down the ballot contenders like Linda Cardellini could benefit. Jennifer Hudson is a huge name, but do voters care about Smash? High profile roles in top contenders such as Laura Fraser in Breaking Bad are a possibilty. Another actress in that category would be Diana Rigg, who many pundits are picking. I just don't know, with the structure of Game of Thrones, if any Guest performance is going to have enough screen time to make an impact, although she would certaintly be deserving. So in my last two slots, I am going with two veterans. Margo Martindale rose to fame with her Emmy win for Justified, and has an incredibly baity role in The Americans. Finally, while many pundits have moved on from Joan Cusack, never doubt the continuity of Emmy voters. She has been nominated two years in a row, and until they prove me wrong, I'm sticking with her.
Posted by Andrew at 9:51 AM