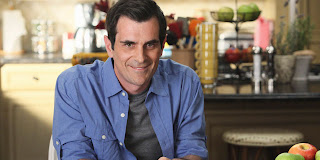 Commentary - I can honestly say, this is the category that has given me the most trouble. Even the fans of Modern Family would agree that this season was not its best. But the question remains, will all four guys return? Maybe I am crazy not to predict so, but I think that this year, there is just too much competition for all of them to make the cut. Of the four, the two that are locks are Ty Burrell and Eric Stonestreet, they are the previous winners, and their roles are the showiest (probably why they are the two of the four that have won before). Ed O'Neill was left off of the first season's nods, and the writers this season missed a great opportunity for him to shine (a man of his age with a newborn). But Jesse Tyler Ferguson is the wildcard. He was nominated for all of the seasons, despite most people thinking he was the expendable one. He may not have the showiest role, but I think a lot of people relate to his character, and like the actor. The other big factor affecting Modern Family in this category this year is Arrested Development. Two previous nominees Will Arnett and Jeffrey Tambor are returning to the race, and are big names to pass up. Voters may be willing to sacrifice a Modern Family or two for these two AD guys. In the final slots, I am going with the crazy, but loveable sidekicks on two popular shows. Max Greenfield made the cut last year, and even with stiffer competition, I think his zany antics on New Girl will be enough for him to make it in again. Finally, I think that this has been a great season for Simon Helberg on The Big Bang Theory, and the BTJA agrees with me. The buzz is rising for him and for the show this year, and I think he will also overcome stiff competition to get his first Emmy nomination. We should also be on the lookout for last year's nominee Bill Hader for SNL, and Adam Driver for Girls as spoilers.
Posted by Andrew at 9:29 PM