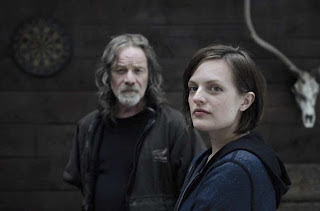 Commentary - A top notch group of contenders, that at the moment leaves out names like Oscar nominees Angela Bassett, Queen Latifah, and Brenda Blethyn, Rebecca Hall, and Oscar Winner Hilary Swank, all of whom are strong contender to overtake the frontrunners. I think it is safe to say that Jessica Lange will be nominated after being bumped up to lead this time around. But her win may not be a guarantee, espcially with BTJA winner Elisabeth Moss hot on her heels for Top of the Lake. Also in the mix is Sigourney Weaver in a Hilary Clinton-esque role. The last two slots are the one I think where upsets could happen. Phil Spector was a disappointment, but despite that, popular Emmy winner and favorite nominee Helen Mirren should still make the cut. She has HBO behind her, and she's, well, Helen Mirren. Laura Linney failed to continue to get nominated for The Big C in that very crowded comedy lead actress category. This year's episodes qualify for the miniseries category, and if voters are still watching this show, this Emmy favorite could get one last nomination for the project.
Posted by Andrew at 2:48 PM