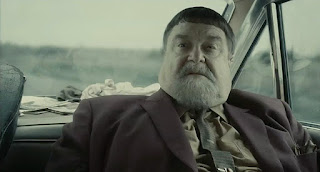 Commentary - This race could be entirely different in a few months, as big names like Tom Hanks in Captain Phillips and Bruce Dern in Nebraska, both of whom I assumed would be lead, could be switched to a supporting campaign, drastically changing the landscape. I am also betting on Matthew McConaughey getting a nomination, but I think it will come for his lead role in Dallas Buyers Club, so I have left him out for his roles in Mud and Wolf of Wall Street for the time being, basically until some of these category decisions sort themselves out. I do think however, that previous nominee and McConaughey's co-star Jonah Hill will make the cut as early word is that he is a standout like he was in Moneyball. We already know that John Goodman is a standout in Inside Llewyn Davis, and while he didn't make the cut last year for Flight or Argo, he did succeed in building a campaign on the fact that despite his illustrious career, he has never earned an Oscar nomination. This could be his year. I am still a little uncertain about Gravity. It could be daring and visionary and beloved, or too difficult for the Academy to wrap its head around. But if they love it, both of its stars, who are the only major characters in the film will be hard to miss contenders. This means that George Clooney could pull a major coup like he did in 2005 where he could a plethora of nods for two separate films (this year Gravity and The Monuments Men). Speaking of The Monuments Men, there are a lot of big names among its ranks, but Matt Damon, at this point at least, seems to be the name that is sticking out of the lineup. Finally, after years of being on the cusp, I think that Michael Fassbender could finally get an Oscar nomination for his role in Steve McQueen's upcoming historical epic 12 Years a Slave. He has built an impressive resume over the last several years, and this could be a role that is baity, but not too much, striking the perfect balance for the voting bloc of the Academy.
Posted by Andrew at 9:12 PM