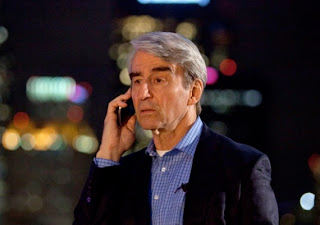 Commentary - This category always seems to have a great deal of turnover, and it looks like this year will be no different. Last year's winner Aaron Paul became the fist repeat winner in years, and I expect him to reenter the race as the frontrunner. Previous winner, and a nominee again last year Peter Dinklage should also return although this year he will face stiff internal competition from this season's MVP Nikolaj Coster-Waldau. Beyond that, I think that there is a good chance that the four are new nominess. Giancarlo Esposito's nomination proved that multiple nominees from Breaking Bad are possible, and Jonathan Banks' turn this season was surely Emmy worthy. Sam Waterston and Mandy Patinkin should probably be called television legends at this point, and both have baity roles in top-notch dramas. While Patinkin failed to make the cut last year for Homeland, I think that the show will do better in terms of nominations, and he will be among the new categories. Last year, two guys from Downton Abbey made the cut, and this year they have several possibilties again. Jim Carter is loveable as Mr. Carson, but there is a lot of competition this year, and I currently have him on the outside looking in. Last year's nominee Brendan Coyle was not submitted this year, and was replaced by his co-star Rob James-Collier. I think that this was a smart move by the Downton team, as Thomas' storyline this season was much more engaging and central than Bates' jail plot. I think that the Emmy voters are still on a Downton Abbey high, and I think that Collier will surprise a lot of pundits and sneak into this category. A lot of people are predicting Corey Stoll, but I still wonder if House of Cards will have enough support to go deep into the acting categories beyond Kevin Spacey. Noah Emmerich is a great pick too, but I'm not sure if The Americans has enough strength as well despite an upward tick in buzz. The other big contender to look out for is Larry Hagman. Last year Kathryn Joosten was nomianted posthumously for Desperate Housewives, and Hagman, like Joosten, was a beloved television icon. Even though the new Dallas didn't make a dent at last year's Emmys, he could be a surprise contender.
Posted by Andrew at 3:11 PM