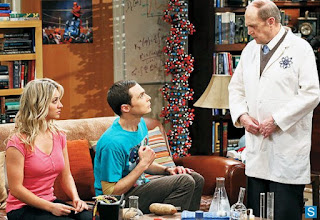 Commentary - Once again, as with all of the Guest categories, this one could go many different ways. Names like Henry Winkler, who is a television legend could inspire votes, as could a list of top contenders including Patrick Wilson, Ron Howard, Matt Damon, David Lynch, a nominee last year Bobby Cannavale, Nathan Lane, Patton Oswalt, and Chris O'Dowd. But for the moment I think that all of them will miss the cut. Bob Newhart has never won a Emmy award, which is a baffling statistic, but this year his role in The Big Bang Theory will most likely give him another shot at Emmy glory. Justin Timberlake his a hit in this category, because he is so damn good on SNL, and he may be joined by several other SNL hosts. Martin Short, in my opinion, was great on SNL, one of the better hosts this season. Short is also a previous Emmy winner with eight total nominations. Will Arnett will most likely get two nominations this year, one in Supporting Actor, and one in this category, where his recurring character on 30 Rock has been a favorite (four years in a row with nominations, but no wins). Matthew Broderick had a hilarious storyline this season on Modern Family as the guy that almost seduced Phil, and could earn an Emmy nod. Lastly, Short and Timberlake, I think. will be joined by Louis C.K. Even though Louie has yet to make the Comedy Series category, there is clearly a lot of love for Louis C.K. This is another opportunity for voters to reward him.