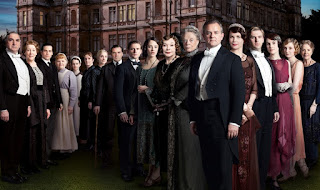 Commentary - This year, the six shows that were nominated last year are all returning to the race. As is previous nominee The Good Wife, which remains the only major broadcast show in a real position to get a nomination (there are some on the outside that are possibilties, but not strong). So the question once again is, which shows get in, and which are left out? I think that four of them are safe, those being: Homeland, Breaking Bad, Downton Abbey, and Mad Men. Game of Thrones has been able to overcome its genre premise the last two years, and while there is some stiff new competition to face, I think that the show is just too big to ignore. Its ratings go up week after week, and it continues to be a hit with critics. HBO's other project Boardwalk Empire may not be as lucky. It definitely has the technical branches of the Academy behind it, but I think that newer competition will force it out. The two new shows I keep mentioning are The Newsroom and House of Cards. The Newsroom will have to overcome so-so initial reviews and legitimate calls of sexism, but let's face it, it is the kind of show that Emmy voters eat up. House of Cards may be hindered by its medium of Netflix, but if the voters are willing to embrace the online medium, then it will be a huge powerhouse at the Emmys. Shows like Nashville, Scandal, Justified, Parenthood, Dexter, The Walking Dead, and Damages are all potentials in acting, writing/directing, and technical nominations, but I think that a series nod is not on the horizon. I think that the other major contender is FX's The Americans. I personally think its a great show, but with so many other big names ahead of it, I think I, and a lot of other people, are underestimating it, and we may end up regretting it.
Posted by Andrew at 7:25 PM