One of the most anticipated films of the festival was the Coen Bros. latest, Inside Llewyn Davis. They have become Academy favorites as A Serious Man, No Country For Old Men (which won), and True Grit have all been nominated for Best Picture. Well the early reviews suggest that once again, the Coens have struck gold as it is getting positive reviews across the board. Here are some sample reviews:

"The sounds of the early 1960s folk music revival float on the air like a strange, intoxicating perfume in the Coen brothers’ “Inside Llewyn Davis,” a boldly original, highly emotional journey through Greenwich Village nightclubs, a bleak New York winter, and one man’s fraught efforts to reconcile his life and his art."

Kevin Jagernaugh at The Playlist at Indiewire:

"Definitely a bit darker than people might expect, particularly in the latter stages, "Inside Llewyn Davis" celebrates those whose moment at fame will forever be a phantom. Llewyn Davis is endlessly striving, gets knocked down and picks himself up again, brushes off his rumpled clothes and gives it another go. He'll make mistakes, he'll fuck up, he'll be down and out and perhaps even on top if ever so briefly. But when that light goes on, and you can connect for even four minutes on stage, in a club you've played hundreds of times, sometimes that's enough. "Inside Llewyn Davis" isn't about someone trying to make it big, but someone just trying to make it, and the Coens celebrate the hard road that can inspire great art."

"Critics of the Coens often fixate on their alleged disdain for their protagonists as they endure Job-like suffering with no end in sight. Llewyn's plight provides no exception, but his conundrum is more understandable because he's trapped by his passion. After a private performance for one potential client, he's told, "I don't see a lot of money in this;" he has no rebuttal prepared. An ode to art for art's sake, "Inside Llewyn Davis" is the most innocent movie of the Coens' career, which in their case is a downright radical achievement." 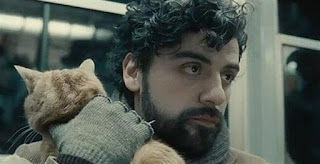