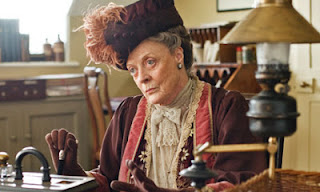 Commentary - Can all six contenders from last year make the cut again. Archie Panjabi and Christine Baranski were great as always, but have Emmy voters moved past The Good Wife? Christina Hendricks will surely get in, is this the year she wins? Or will the quality of Mad Men this season affect her even getting a nomination? Maggie Smith is definitely in because she's, well, Maggie Smith. But will Joanna Froggatt get in over Elizabeth McGovern, who has some meaty storylines this season? Anna Gunn finally got nominated last year, but was it a one time thing? And of course the question remains, who will take their spots? Morean Baccarin looks to get in after surprisingly being left out last year, as Homeland continues to rise in popularity. Monica Potter maybe be on a show that has been consistently overlooked, but her cancer storyline gives her a pretty good chance to defy the odds. Kate Mara was a standout on House of Cards, but I am still hesitant due to the newer format of the show. Some outside contenders include Regina King, Lean Heady, Hayden Panetierre, January Jones, Angelica Huston, Rose Byrne, Sharon Gless, and Jennifer Carpenter. But also look out for those female characters on The Newsroom. Despite criticisms of sexism on the show, these women are still scene-stealers, and particularly Olivia Munn and Alison Pill should not be discounted.
Posted by Andrew at 7:52 PM