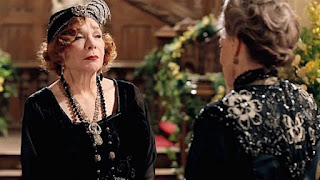 Commentary - I think everyone can agree that as wonderful as it was to see Shirley MacLaine on Downton Abbey, Julian Fellowes and his team did not give her enough to do. That being said, she is a screen legend, and the show is beloved, so I expect her to not only get nomination but to be the frontrunner to win (for now). Right on her heels is another legend in her own right, the great Jane Fonda, who has a turn in The Newsroom. Joan Cusack and Loretta Devine both come back into the spolight for roles they have either been nominated for or won for in the last two years, and both could easily see their names reappear. Alfre Woodard also returns with her nominated role in True Blood, as well as a potential nod for her turn in Private Practice as well. She is so popular within the Television community that she can never be discounted. Then we get to The Good Wife. Its overload of incredible television actresses this year makes it so difficult to narrow down who gets in or who doesn't. Stockard Channing is well-liked among the Academy and even got nominated for Out of Practice, my guess is that she is in. Last year Martha Plimpton won for this role, and could also be one of the top tier to get in. I would love to see Carrie Preston, who is just hilarious on the show, but I also think that Maura Tierney could get in as well. Margo Martindale returns to the Emmy race with her turn in The Americans, and she is a knockout as always. Diana Rigg for Game of Thrones, Laura Fraser for Breaking Bad, and the three contenders from Mad Men all are on top-tier shows, and should not be discounted. Finally, while Smash was a flop in the end, don't discount the popularity of names like Jennifer Hudson and Liza Minnelli. They are Academy Award winning actresses, and both get plenty of juicy singing and acting material to be noticed.
Posted by Andrew at 5:29 PM