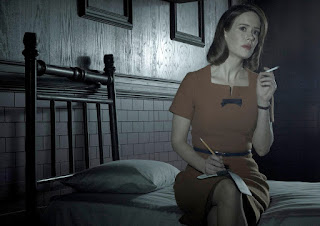 Commentary - I applaud the Academy's decision to eat crow and re-expand the long form acting categories. It was ridiculous to put them together, especially when you look at this field of incredible talent. It looks like it will be extremely difficult to narrow down the nominees to five. First, this new season of American Horror Story was stuffed with terrific supporting performances, and now they really have a shot to win, as most likely Jessica Lange will bump up to lead. My money is on this season's MVP Sarah Paulson, but Lily Rabe and Chloe Sevigny could also make the cut. Another big cast that is looking to make a dent is that of Steel Magnolias. Alfre Woodard is a shoo-in, with a SAG nomination, and the fact that she is Alfre Woodard, but I do wonder if maybe Emmy voters will make room for Phylicia Rashad (who has yet to win an Emmy) and/or Jill Scott. Holly Hunter made a career in the 1990's in television movies, and has returned to the form with Top of the Lake, which has great reviews to back her up. I think that some legendary actors are in play including Ellen Burstyn and Debbie Reynolds, both of which play flashy roles in top contenders. Some stand alone contenders include Oscar nominee Gabby Sidibe, Emmy winner Michelle Dockery, and Roma Downey from The Bible. Finally, while Five didn't exactly excited Emmy voters, maybe Call Me Crazy will do the trick with lots of Oscar and Emmy winning actresses to boot including Jennifer Hudson, Octavia Spencer, Jean Smart, and Melissa Leo.
Posted by Andrew at 7:55 PM