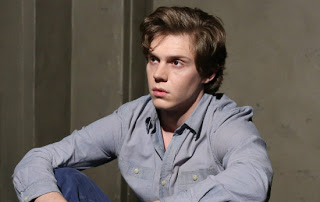 Commentary - The whole category could be filled out by AHS guys, but my guess is that will not happen. Of that bunch, my guess is that James Cromwell is a lock, and Evan Peters and Zachary Quinto are distinct possibilities. Behind the Candelabra also has some great choices, Dan Aykroyd and Rob Lowe being the most likely. While were still not sure of the quality of the returning Arrested Development, Jeffrey Tambor better go ahead and book his ticket, because although Phil Spector was less than stunning, he was still good enough to make the cut. Top of the Lake, by contrast, was a critical hit, and Peter Mullan could ride it's success to an Emmy nomination. Ciaran Hinds had the flashier role in Political Animals, a vastly underrated miniseries, but if I had a vote it would goto James Wolk, who was the glue that held the whole group together. Other possibilties include big names like Michael Gambon, Jason Ritter, James Woods, Oliver Platt, and Richard Dreyfuss, but in each of those cases, the films or miniseries that they are in lack buzz, so it would be up to their own personal popularity to break into the race.
Posted by Andrew at 9:22 PM