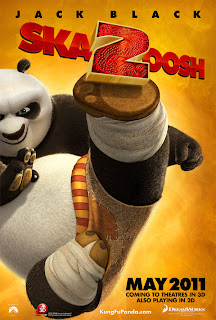 Other Contenders - Rio, The Adventures of Tintin, Arthur Christmas, Winnie the Pooh, Puss in Boots, Cars 2, Gnomeo and Juliet, The Lion of Judah, The Rabbi's Cat, Chico & Rita

Commentary - Wow, this year is so weak for animation, especially with Cars 2 completely bombing. Unless a late bloomer comes in and steals the scene, a less-than-stellar winner will most likely emerge. We also don't know yet how many nominees there will be. My guess is only three this year, so at this point that is what I'm going with. But the rules have changed and some of these need distribution before they can be eligible. Kung Fu Panda 2 and Rango got pretty good reviews as well as good box office, so although they don't compare to previous nominees, they both look to be good shops. In the last slot I am currently going with the sequel to a previous winner in this category Happy Feet 2. I personally didn't like the first one, but apparently the Academy did, so whose to say the second won't at least get a nomination? If The Adventures of Tin Tin is eligible (which could go either way), and is good, then it could be a dark horse contender. Also Winnie the Pooh may be light and short, but its gotten pretty good reviews, and it tugs at the heartstrings, which may sway some voters its way.
Posted by Andrew at 8:56 PM