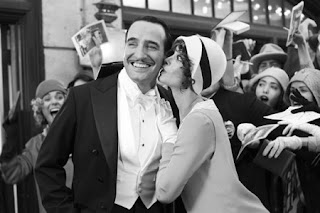 Commentary - This one has a lot of big names that will need to be sorted through. George Clooney and Leonardo Dicaprio return to the race with two big buzzed projects. The Descendant's trailer is okay, and Eastwood has not hit the mark in a couple of years though so neither is safe. A Dangerous Method's trailer is also a little eh? but I really hope that Michael Fassbender is good enough to get some recognition, which is long overdue. The trailer however for Tinker, Tailor, Soldier, Spy, looks great, and Gary Oldman, who has been flirting with Academy recognition might finally score a nod. In my last slot I am going with a film festival favorite, and a foreign contender in Jean Dujardin. We'll have to see how American audiences respond, but he could get an Oscar nod ala Marion Cotillard a couple of years ago. However, if you look at the other contenders there are so many big names like Ryan Gosling, Paul Giamatti, Brad Pitt, Johnny Depp, Tom Hanks, and others, so this race is far from over.
Posted by Andrew at 1:05 PM