Other Contenders - Planes, The Wind Rises, Cloudy With a Chance of Meatballs 2, Despicable Me 2, Turkeys, The Croods, The Nut Job, Escape from Planet Earth, The Trick or Treaters, The Smurfs 2, Santaprentice, Leo the Lion, Postman Pat: The Movie - You Know You're the One, Aunt Hilda. 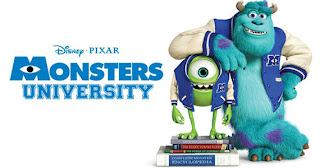 Commentary - I hope this is another great year for animation, like last year, where four fantastic films: Brave, Frankenweenie, Wreck-It Ralph, and ParaNorman all vied for the top spot in a race that really went down the wire. Not included in this top five for the moment are some big projects including some from The Weinstein Company including: The Trick or Treaters, Leo the Lion, and Santapprentice. We'll have to see if Weinstein magic works for them,. For the moment, all of these projects are quiet so I hesitate to put them too far up the list. Also on the outside looking in are films like The Nut Job and Turkeys, which have lots of big names involved but seem too light to go the distance. There is also a new film fro Hayao Miyazaki, as well has sequels to successful films that despite decent reception failed to make the Animated Feature race such as Cloudy With a Chance of Meatballs 2 and Despicable Me 2. Now I am sure you are wondering: who exactly is in the top five at the moment? First, coming off a successful upset, despite huge problems with production, Pixar must be feeling good right now, and their newest, Monsters University looks to be another top contender for the studio. Disney has two big films this year. One, called Planes, looks like another Cars, which doesn't spell good news. But Frozen, on the other hand, could be the one that gets the glory, at least from early word on the project. Dreamworks also has their hands full, and although The Croods was a slight critical disappointment, they are still looking to buzzed project, Turbo. Fox also looks to be busy with their new film Epic, which looks beautifully animated, and if it captures the heart of the children's book it is based off of, then it could be a stealth contender. Finally, almost every year and outside the box choice or foreign choice (think Pirates!, The Illusionist, The Secret of Kells, The Triplets of Bellville, etc.). This year's Cesar winner, which premeired at last year's Cannes Film Festival, could be the sweet and different film animators within the Academy like to throw into the mix. It's only major problem at this point is its lack of US distributor.