Will Win/Should Win - The Muppets "Man or Muppet"Could Win - Rio
Should Have Been Nominated - Any other Song from The Muppets, The Living Proof from The Help, Hello Hello from Gnomeo and Juliet, and countless others. 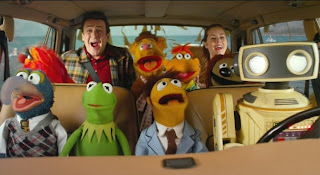 Commentary - I guess I can now use this time to discuss by disgust with the Academy over this award. Original Songs can be incredibly useful tools and incredibly well done. Over the years some of the greatest songs of all time have gone on to win this category. But the Academy keeps changing the rules about it, and now we have two nominations, and neither of them are the best songs from their own movie. If the Academy is going to scrap the award, they need to go ahead and do it. But I think it would be a shame to do so. They need to restructure back to a normal way of nominating. That being said, obviously there is a 50/50 chance that I get this one right. I don't think the Rio song has enough buzz, and the song from The Muppets features prominently in the film. So my bet is that Muppets takes this, although it could go either way.
Posted by Andrew at 4:12 PM