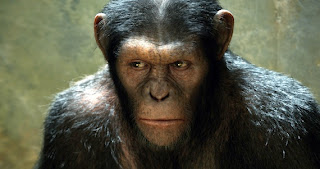 Commentary - This one is actually competitive, whereas in recent years winners such as Inception, Avatar, and The Curious Case of Benjamin Button seemed like forgone conclusions. If I had a vote, it would go to the finale of the Harry Potter series, simply as a tip and a nod to this wonderful film series, which is so far missed any Academy recognition. But my guess is that it doesn't get the win here, Art Direction probably being a better bet (And that won't happen either). This leaves three, as Real Steel should just be happy to be here. Transformers, while dumb movies, do have great special effects. But if the first couldn't beat the Golden Compass, I don't think it will happen this time around. In my mind, with the VES wins, Rise of the Planet of the Apes, looks like the film to beat here. It doesn't hurt that it had the best visual effects of any film this year. The only one I can see truly upsetting it is Hugo, as it had the most nominations and the Best Picture nod, but I'm hoping that the Academy recognizes the highest quality when they see it.
Posted by Andrew at 4:32 PM