Will Win/Should Win - Life of Pi

Could Win - The Hobbit: An Unexpected Journey or The Avengers

Commentary - If there is a Best Picture nominee in the Visual Effects category, it is almost guaranteed the win. In some cases, like Curious Case of Benjamin Button, Avatar, Inception, The Lord of the Rings movies, this works out for the better, as the better film also happens to have the best effects of the bunch. Last year though, while I liked Hugo, and it was clearly the better film, it did not have the best effects with Rise of the Planet of the Apes also in that category. This year looks to be more like Avatar, and less like Hugo, as probably the best film of the bunch, Life of Pi, also has the most dazzling 3-D visual effects, particularly the stunning digital tiger. And my guess is that none of the other films, even a Peter Jackson film (which have won four over the last decade or so), will be enough to overcome it. 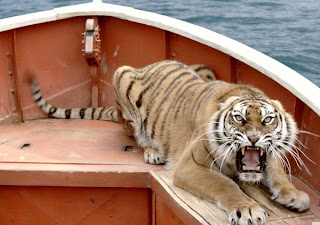