So Weinstein Co. has decided to do some switcheroos in terms of their upcoming campaigns for August: Osage County, the adaptation of the Tony and Pulitzer winning play. I had originally thought (as did a lot of people) that Meryl Streep would campaign as lead, Roberts most likely as supporting, and Martindale as supporting. It looks like instead, Weinstein will push Roberts as lead (not a real surprise), but will bump Streep down to supporting alongside Martindale. The role was originated by Deanna Dugan on stage, and won her a Best Actress in a Play Tony. But it is a lot easier to get in two supporting performances than it is to get in two leads, and I think this is a brilliant move for Weinstein and could ensure more nominations across the board for the film, if it lives up to the hype. Some will argue that this hurts Martindale, but Streep has recently won, so there is not a sudden need, and recent winners Melissa Leo and Octavia Spencer were able to overcome internal competition and win Oscars, so really anything is possible. 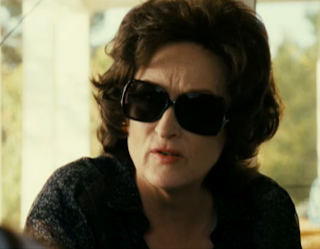