As always, it is too early to tell whether the small group of viewers and critics who have seen Gravity represent a more widespread viewership, but so far the response to Alfonso Cuaron's Gravity is stellar. It looks to be the visual specatcle of the year like Avatar, Hugo, and Life of Pi before it, and probably is already a lock for at least Visual Effects. Even if it ends up being downplayed a bit as it hits stateside, it already has received a huge Oscar boost from its initial premeire, the question is, can it hold the buzz? Check out some early reviews below:

"About halfway through Alfonso Cuaron’s astonishing “Gravity,” Sandra Bullock, playing a lost astronaut stranded 375 miles above Earth, seeks refuge in an abandoned spacecraft and curls into a floating fetal position, savoring a brief respite from her harrowing journey. Of the many sights to behold in this white-knuckle space odyssey, a work of great narrative simplicity and visual complexity, it’s this image that speaks most eloquently to Cuaron’s gifts as a filmmaker: He’s the rare virtuoso capable of steering us through vividly imagined worlds and into deep recesses of human feeling. Suspending viewers alongside Bullock for a taut, transporting 91 minutes (with George Clooney in a sly supporting turn), the director’s long-overdue follow-up to “Children of Men” is at once a nervy experiment in blockbuster minimalism and a film of robust movie-movie thrills, restoring a sense of wonder, terror and possibility to the bigscreen that should inspire awe among critics and audiences worldwide. " 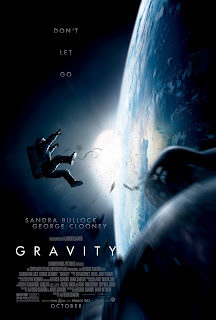 Oliver Lyttleton at The Playlist at Indiewire gave the film an A writing:

"With 'Children Of Men' still more of a cult favorite means that he perhaps doesn’t have the reputation among wider audiences that he deserves, but that’s likely to change here. The film’s technically perfect, of course, from the terrific sound design to the impeccable effects (the exact extent of the CGI is difficult to say, because pretty much everything looks photo-realistic, even when
things head indoors). But it’s also cleverly written, and more than anything phenomenally directed, from the way that he uses every available surface to tell his story (someone’s going to write a book one day on the use of reflections in this film) to the way he and Lubezki shift the light to vary the color palette, preventing it from becoming repetitive. Almost every decision is inspired.
Almost every one. There’s one nod to “2001” at one point that’s so overt enough that it threatens to break the reality of the world that Cuaron’s set up. And the very final music cue is so overbearing that we nearly dropped the film down a grade. But ultimately, these are minor quibbles. “Gravity” is about as visceral an experience as you can have in a cinema, it’s a technical marvel, and it’s a blockbuster with heart and soul in spades. It’s about the best opening to a film festival that you could ask for."

Todd McCarthy at The Hollywood Reporter thinks it will be a popular success:

"At once the most realistic and beautifully choreographed film ever set in space, Gravity is a thrillingly realized survival story spiked with interludes of breath-catching tension and startling surprise. Not at all a science fiction film in the conventional sense, Alfonso Cuaron's first feature in seven years has no aliens, space ship battles or dystopian societies, just the intimate spectacle of a man and a woman trying to cope in the most hostile possible environment across a very tight 90 minutes. World premiered at the Venice Film Festival, with Telluride showings following quickly on its heels, this Warner Bros. release is smart but not arty, dramatically straightforward but so dazzlingly told as to make it a benchmark in its field. Graced by exemplary 3D work and bound to look great in IMAX, the film seems set to soar commercially around the world."
Posted by Andrew at 8:07 AM