Commentary - I think that Sarah Paulson's performance on this season's American Horror Story is one of the most impressive things I have seen on television in a long time. I also think that she has the showiest of the performances, stealing every scene she is in. And I think that all of this will lead to her winning her first Emmy award. However, this will not be a cakewalk to the podium, as there are several other contenders that will be hard to beat. Of couse I am speaking of Ellen Burstyn and Alfre Woodard. They are both extremely popular within the party, are acting legends at this point, previous Emmy winners, and could probably sit on the toilet and read a newspaper and still win an Emmy award. Furthermore, this year they both have scene-stealing roles in popular projects. However, I can not imagine a panel watching all five performances and not going with Sarah Paulson, so I am sticking with my guns for now. 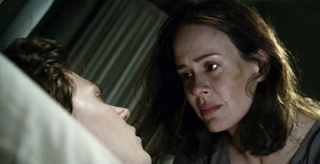