As of late there has been so much discussion over Lee Daniel's latest project originally entitled The Butler (later changed due a ridiculous lawsuit from Warner Bros). The latest discussion has been about the overall quality of the film and the increasing amount of Oscar buzz surrounding the project. Well all the hype and the buzz led me to the theater this afternoon to see the now named Lee Daniels' The Butler, a flawed, but in the end emotionally effective and entertaining enterprise that sets itself up as the first big Oscar contender of the early fall/late summer.

Starting in 1926 Macon, Georgia, The Butler is the story of a young boy named Cecil Gaines (played as an adult by Forest Whitaker) on a cotton farm who grows up to be a long-serving butler in the White House, serving from Eisenhower to Reagan, a total of seven presidents. The story's main focus however is on his family, including his son (David Oyelowo), who while attending college in the South, becomes swept up in the violence of the Civil Rights Movement, much to the grief of his father, who does not believe that is the way to achieve true civil rights. Since his time on the former plantation where his landlord (played by Vanessa Redgrave) tells him how to disappear into the background and become the perfect servant, Cecil has always believed that what he does matters. His son's aggresive nature is disturbing and goes against his way of life. Stuck in the middle of her son and husband, Gloria Gaines struggles with the separation and battles of her family, slipping into vices such as alcoholism and adultery. Throughout the turbulent decades of the 50's, 60's, 70's and 80's, the social struggles of the country are faced by Cecil and his family, and as the world around them is turned upside down, he continues his quiet determination to prove to the world and his family that his hard work and loyalty can change the world. 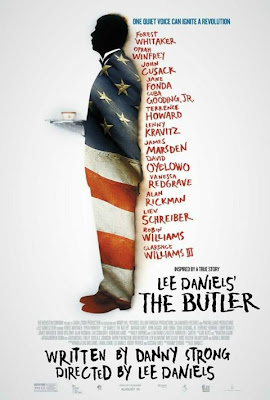 Lee Daniel's The Butler is one of those films that is really hard to wrap your head around. There are so many wonderful elements in it that make the film entertaining and emotionally stunning. The images of the Civil Rights Movement, the violence and the struggle are realistic and historically accurate, which makes their impact incredibly felt. Furthermore, while there are plenty of rough spots in the story, there are also wonderfully emotional, as well as many humorous moments that really work well. But the real triumph of the film is the acting from its talented cast. Some of the supporting players make their mark including Cuba Gooding Jr. who is funny and heartfelt, and reminds me that at one point he really was an actor of substance. Hopefully he can use his success here to relaunch a successful film career. David Oyelowo has a big role that could launch him into a new realm of his career, and he is outstanding as the revolutionary son. Oprah returns to the screen for the first time since Beloved, and the results are fantastic. She goes through the range of emotions that her character requires with ease, and she has natural soulfulness, subtlety and chemistry with her castmates that reminds us all that she really can act, and yes, she is Oscar worthy. But the real stunner here is Forest Whitaker. He is quiet, expect for moments when he is required not to be, and is subtle to say the best. But underneath his restrained exterior is an extremely heartfelt, and extremely effective performance that may not be able to stand up at the end of the year against more bold performances, but it sure does deserve to.

However, when I said that The Butler was flawed, I was not kidding. I was a huge fan of Danny Strons with his scripts for Recount and Game Change, but this time, his script almost fails the movie. There are moments that are duds on the screen and the pace, while entertaining, also doesn't allow a lot of time to absorb the events, and more importantly, their impact on our main characters. The biggest problem though is the stream of actors that play the Presidents and First Ladies. While the actors playing them are all talented, including Robin Williams, Jane Fonda, John Cusack, Liev Schreiber, Alan Rickman and James Marsden, none of them really hit the nail on the head, or more importantly, aren't allowed the room to. Of the bunch, I actually thought Marsden was the best, but that doesn't mean much. Some of their impersonations were just bad, and I find it hard to believe it was their fault. None of them are given enough screen time or really any meaty storylines to play, and so most only serve as a distraction or a foil to Cecil's character. This endless stream of cameos shares some characteristics with the disappoting Rob Marshall endeavor Nine, as that too top-billed top-notch actors only to end up reducing their roles to sideshows.

Lee Daniels campiness, over-the-top approach, and directorial style really worked in Precious, and was a complete failure in The Paperboy. This time around, it works to some degree, especially in the emotional and funny moments that help make the film work. But sometimes, it stretches too far and the audience can feel it. I am happy to say though that some of his instincts have been tamed here, and may be signs of a maturing director. I am still looking forward to his future projects.

In the end, the good points about the film, the emotion and the main performances were able to overcome the parade of presidential losers and the more cringe-worthy moments to create a film that is a great acting showcase, an emotional heart-tugger that really captures its audience, and entertains while teaching a valuable lesson. So many on blogs and comments have suggested that another film about the Civil Rights era is not needed. This constant argument that we are in a post-racial era constantly bombards projects that still dare to discuss the subject. In a time when it seems the racial divide is growing, the Voting Rights Act is no longer potent, and states across the country are suppressing minority voters, the notion that no more discussion of race is needed is absolutely ridicolous. The Butler ends with the election of Obama, and Cecil's pride swells when he sees a black man in the White House that he served at for so many years. It is a wonderful moment, and a reminder that while so many positive steps have been taken towards true justice and equality, the fight lives on. This flawed, but ultimately succesful project is a nice reminder of the continuing struggle.