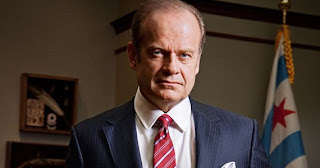 Commentary - The first five names easily came to me as the top contenders. Cranston will probably win again, for his searing portrayal on Breaking Bad. Hamm may never win this category, I mean he couldn't even win the one year Cranston was not on the ballot, but will probably continually be nominated. Damien Lewis is excellent in Homeland, and if that show will be as popular as we assume, he's in. Kelsey Grammer could surprise some people and win, as he plays bad really well, and is an Emmy favorite. He's definitely in for a nod. Steve Buscemi continues to win these SAG Awards, and while I think Boardwalk Empire doesn't have as much heat this year, I think he still gets in pretty easily. It is that last slot I am having trouble with. Dustin Hoffman is a two-time Oscar winning actor and at this point in his career, a living legend. But Luck has gotten some bad press, cancelled during the shooting of Season 2, and his only chance of getting in is on name recognition alone. Michael C. Hall is always great, but Dexter I think is finally out of the discussion. Timothy Olyphant was nominated last year, but with all this new competition, I don't know if he has enough support to repeat. Instead I am going with Hugh Laurie. He has never won for House, but has always been a contender, and this being his last time, I think the Emmys will not pass up another opportunity to give him one last recognition.
Posted by Andrew at 11:19 AM