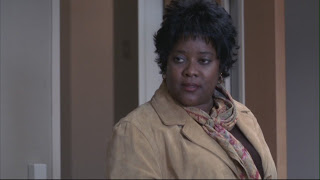 Commentary - Once again, a close race with lots of contenders. Some though have emerged from the pack. Loretta Devine surprised a lot of people when she was nominated for Grey's. Then she beat the odds and actually won. This year, as Adele continue's her slip into complete memory loss, Devine once again proved why she is an Emmy winner, so I expect she is one of the top contenders. Up against her are two gals from Shameless. While it may not make a dent in the other acting races, it has a good chance of getting two nods in this category alone, as last year's frontrunner (who eventually lost to Devine) Joan Cusack, as well as a head-turning role from Oscar winner Louise Fletcher. Jean Smart is a former Emmy winner, whose long television career is clearly admired by the Television Academy. Although Harry's Law was cancelled, her role will probably still be enough to merit a nomination. Mad Men did well in this category last year with some surprise nods. So my guess is that at least one of its entries makes the cut. I am going with the wonderful Julia Ormond, and Alexis Bledel is an outside possibility as well. In the last slot, I would love to put Carrie Preston, or one of the Smash gals, but I think that SVU, which has always been dominant in the Guest categories gets in an emotional turn by Chloe Sevigny instead.
Posted by Andrew at 10:56 AM