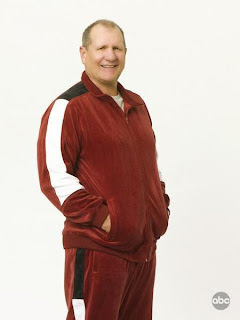 Commentary - Well, the Modern Family boys are back and in full force. As long as the show is as popular as it is now, my guess is that these guys get in, no problem. The question is, what about the other two slots? With Jon Cryer moving up to Lead, and Glee sucking so bad, I don't think Chris Colfer can get in, I think that this leaves room for two completely new nominees. I am this close (imagine pinched fingers), from putting James Spader in this race. I know The Office has lost its luster, and Spader was not very good this season. But he is James Spader, and is beloved by this Television Academy. He could probably be filmed using the toilet and be in Emmy contention. But alas, I am hoping that instead, the Academy honors two over-the-top comedic performances that are simply brilliant. The first is Nick Offerman for Parks & Rec. With the show on the rise at the Emmys, I think that this is finally the season it expands beyond Poehler in the acing categories. Plus Offerman is a familiar face, and does a great job on the show. The last slot, I am a little hesitant about. But still, in this particular category the Emmy voters have liked incredibly funny, slightly odd performances a-la Brad Garrett, David Hyde Pierce, and Sean Hayes, all big scene stealers as supporting characters. And no one fits perfectly into that slot than the New Girl's Max Greenfield. He is absolutely hilarious, and just ridiculous enough to get noticed for an Emmy nomination.
Posted by Andrew at 9:05 PM