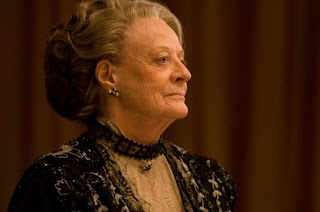 Commentary - I don't know why I feel this, but I think this is going to be a category that has a surprise or two come nomination morning. But with so many chocies, I think I am going to play it safe instead. I think it's okay to take risks on predictions, but not to the point where you are simply completely off the mark. Maggie Smith is a sure-fire nominee, having won for this role last year in the Movie/Mini category. I think she could easily win this year as well, simply because she is Maggie Smith. This could be the year that an actor from Mad Men wins an Emmy, and if not, Christina Hendricks is at least a lock for a nomination. I also think that The Good Wife being the only real contender for the top prize from a broadcast network, it is going to do well down the line. And both Baranski and Panjabi are Emmy winners who have had great seasons on the series. I think they get in again as well. In the last two slots, I am a bit stumped. Homeland and Boardwalk Empire are really popular shows, and names like Morena Baccarin and Kelly MacDonald will garner a lot of support. But I think that instead the power of Anna Gunn's performance in Breaking Bad, and the name Angelica Huston will be too much for outside contenders, and both will hear their names called out on nomination morning.
Posted by Andrew at 12:52 PM