Commentary - When you watch this year's set of nominees there is a clear frontrunner among the bunch, and that is Anna Gunn. She chews through scenery with gusto, and literally blows the competition away. The only other tape that really comes close is Morena Baccarin, who has an empathetic tape that some voters really go for. So you must be asking the question, why am I not picking Gunn to win. Of the bunch, I hope she does win, since the best performance of the year, Monica Potter, was snubbed. But there is an Emmy giant on the ballot and her name is Maggie Smith. Yes, she is fantastic in Downton, even though her tapes (as well as her co-stars) are not really tailored to her. Plus she has won twice in a row for this role, and they clearly still like Downton Abbey. If the panel goes with episodes, then Gunn is the winner. If they go with their heart, its Dame Maggie all the way. 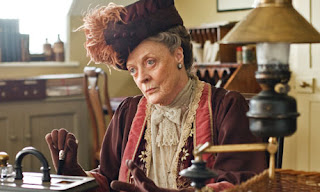