Could Win - Louie, 30 Rock, The Big Bang Theory, and Veep

Commentary - So I think that we should all be honest with one another as much as possible, and let's be honest, nobody knows what the hell is going to happen on Sunday night in this category. Drama Series, I'm pretty sure, comes down to two choices, but here there are honestly five shows that could take the prize (sorry, but I don't think Girls has a shot in hell). In 5th, I have Veep. While it does not have the writing or directing, it did really improve its nomination total, and it is right up the Academy's alley with its political themes. In a very close fourth is The Big Bang Theory, and I really think that it could be the dark horse here. Like Veep, it missed writing and directing, but it won its first technical award showing its broader support, and Bob Newhart won becoming the first acting winner outside of Jim Parsons (sure that was more about him than the show, but it could bring in some previously hestitant supporters). Also, it did incredible well on the critics circuit, and most importantly, it is the biggest show in the world right now, and it is hard to ignore. Don't be surprised if they walk away with the top prize. Louie is topping a lot of people's list, and while I would love it to win, I just honestly don't see it. It is a brilliant show, but it is also incredibly subtle (something they really don't go for), and it seems to be all about Louis C.K., not just the show. But Melissa Leo's win proved they do look at the show as a whole, and it did manage to get almost all of the key nominations. Plus it just happens to be the coolest pick of the bunch, and sometimes, not often, Hollywood does like it show off its cool factor. I think that in the end though this comes down to two. 30 Rock was my pick forever, and after winning the casting award at the Creative Arts, its first win in years, I do think that it is a possibility. They clearly love the show, and there definitely is some Modern Family fatigue. Sometimes sentimentality does win the day. But not always, and while we may be tired of Modern Family winning everything, the Television Academy clearly still loves the show. I also think that there are too many possibilities of alternatives, and that in the end the panel will simply go for the old favorite. It is a very close race and hard to determine, but in the end, it is always safe to pick the incumbent. 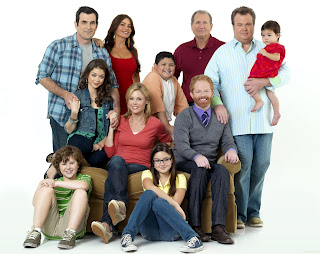