Commentary - This whole Emmy season, I assumed that this would come down to a battle between Shirley MacLaine and Jane Fonda. When MacLaine was surprisingly snubbed, I assumed that Jane Fonda would be the presumed frontrunner. I was right, and most of the pundits and experts out there are picking her to win, and rightfully so. But when I saw Carrie Preston's name on the ballot, I couldn't help but smile. This race has always thrown some curveballs, and the last two winners, Martha Plimpton and Loretta Devine are proof that veteran character actors can pull off a victory over bigger names if their episodes hit the rights notes. It is probably futile to bet against the great Jane Fonda, who I love in The Newsroom, but with the exception of a few short, yet brilliant scenes, most of this episode she is in the background. Carrie Preston gets a lot more screentime, and certaintly makes the most of it. This may seem like a crazy pick, and maybe I have lost my mind because I just love her and her performance on The Good Wife so much, but I kind of think that this one is going to happen. Also look out for Joan Cusack and Margo Martindale, who both have excellent submissions. 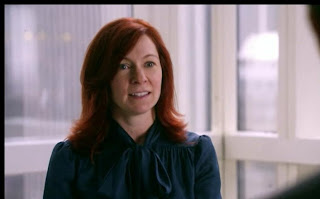