Commentary - When I sat down to watch the episodes of these six nominees, I expected it to be a close race. Six great actors in six really good shows should add up to a tough race. There are definitely four out of the six that have a legitimate shot at winning, but I think that one person's episode is so far ahead of the other three that this one turned out to be a relatively easy pick. First, there is Kevin Spacey. He wanted to submit a Washinton-based episode, and it doesn't hurt that David Fincher directed it, but I don't think it was his best submission, and while the Emmys clearly like political shows if Martin Sheen couldn't win for some of his incredible submissions, I don't think Spacey will win for his good, but not best of the season. So why is he still in this race? Because he is Kevin-freakin-Spacey. He is a two-time Academy Award winning actor on the hot new political drama, that did extremely well with Emmy voters in terms of nominations. Of course he is a possibility. The second is Jeff Daniels. The Newsroom fell flat with Emmy voters, but in this episode he does have one of those stirring Aaron Sorkin, David E. Kelly esque, speeches that have served previous Emmy winners well in the past. However, the rest of the episode leaves much to be desired in terms of his performance, and like I said, the show just seemed to fall flat with the voters. Finally there is Bryan Cranston. He has won this award for Breaking Bad many times in the past, and the show is in its best position to win the top prize. But I think, while he is the clear second place, and could easily win, that he lacks something that he had in his first wins. That factor is empathy. In the first couple of wins, while his character was doing bad things, he was also doing them out of desparation, there was an underlying understanding with the audience. Well, in this last season he has gone to full-on bad-ass, and while Oscar voters will pick a Christoph Waltz in Inglourious Basterds or a Javier Bardem in No Country For Old Men, Emmy voters usually require a bit more. So that leaves Damian Lewis. He surprised us all last year with a win, and this year, he has an even better episode, the popular Q&A. He absoultely blew me away, totally out did his amazing co-star Claire Danes, and I honestly don't think there is a better episode in the bunch. As we have seen many times before, other factors can really sway a panel, which is why we cannot count out Cranston, Spacey, and Daniels. But if they actually sit down and watch the episodes, I don't see how Lewis can lose. 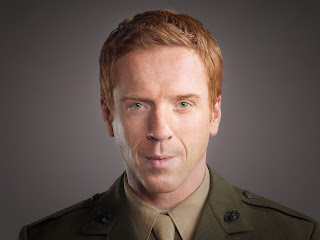