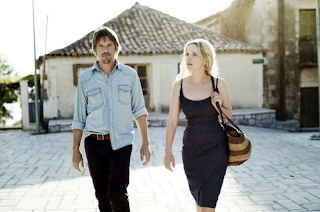 Commentary - A lot of big name projects this year, and like last year, the entire category could be stacked with top-tier Best Picture contenders. The only one that has a track record at this point is Richard Linklater's latest Before Midnight. The previous effort received a Screenplay nomination, and this current one was a Sundance hit. There is a lot of competition, and it will have to hang on to fight its way to the top. The next one that most people are probably writing off after Young Adult did not do so well (A WGA nod though), is Jason Reitman's latest Labor Day. With a great cast, and excellent source material, I have a feeling this could be another Up in the Air for Reitman and his team. The next three are probably three of the most buzzed contenders for this year's awards. George Clooney and Grant Heslov have done extremely well in this category, and this baity project revolving around stolen art in Nazi Germany looks like it will be another home run. August: Osage County was a huge Broadway hit, and if Tracy Letts can transplant it to the screen with ease, then he is sure to be in the conversation. Finally, Martin Scorsese's latest Wolf of Wall Street looks great, and if The Departed can win Screenplay with the old and conservative Academy, then Terence Winter could get his first nod (although his previous crime-related and gritty works were not fantastic so he'll have to really knock it out of the park).
Posted by Andrew at 1:22 PM