This stunning new poster for this year's Cannes Film Festival features long time couple Joanne Woodward and Paul Newman, two of my favorite actors. Last year's featured Marilyn Monroe, so they have a great streak going. Check out the poster below: 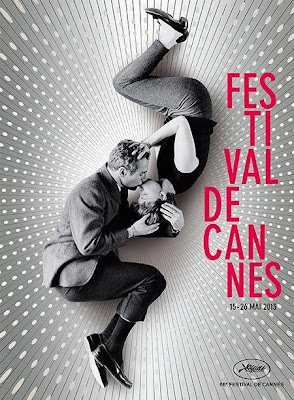 The press release from the organizers of this years festivals explains their choice:

"To grace the poster for its 66th edition, the Festival de Cannes has chosen a couple who embody the spirit of cinema like no other: Joanne Woodward and Paul Newman, photographed during the shooting of the aptly named A New Kind of Love, by Melville Shavelson (1963).

For the Festival it is a chance both to pay tribute to the memory of Paul Newman, who passed away in 2008, and to mark its undying admiration for Joanne Woodward, his wife and most favoured co-star.

They were honoured at the Festival de Cannes in 1958 – the year of their marriage – with the selection In Competition of Martin Ritt’s The Long Hot Summer, the first film in which they appeared together. The links between their story and that of the Festival continued with a series of films directed by Newman, who cast Woodward in unforgettable roles in The Effect of the Gamma Rays on Man-in-the-Moon Marigolds(Competition – 1973) and The Glass Menagerie (Competition – 1987)."

For more information visit: http://www.festival-cannes.fr/en.html#debut
Posted by Andrew at 6:46 PM