90. Office Space (1999) - Cult classic is a term thrown around way too often for things that don't deserve it, but 1999's Office Space isn't one of those films. In all senses of the word, Office Space has truly stood the test of time because of the fans that brought it back to life despite its initial failures. More than a decade after its box-office flop, Office Space continues to live on in infamy as one of the best satires on the Dilbert-esque world of buisness to ever grace the silver screen. It is frequently funny, well-acted by its entire cast, and most importantly, relies on the unusual and jabbing wit of the talent Mike Judge, famous for many by his successful 13 year run of the hit animated series King of the Hill (one of my personal favorites), his abilities to attack the corporate world without losing credibility help make Office Space shine, and for all the workers out there, I too refuse to work on Saturdays, no matter what my boss says.

89. A League of Their Own (1992) - This is a personal favorite, and while some may claim that it is too light to be considered on any best-of list, I dare you find one person who doesn't know the infamous line, "There's no crying in baseball", and one person who doesn't find this film a charming, engaging film filled with memorable performances, and a wonderful story about an important step in women's history that is often forgotten in modern history lessons. It manages to balance its humor with its more dramatic moments, and tackles some serious issues regarding feminism with an air of lightness that makes the medicine go down easy, and embraces its quirky characterizations with gusto, giving every woman something that makes them more than just nameless pretty faces. Penny Marshall and her team assembled a wonderfully entertaining movie filled with memorable moments, and incredible entertainment value, and that is worht celebrating.

88. Clerks (1994) - One of the weirdest, quirkiest, memorable films of the 1990's, Clerks is truly an original concept that showcased a truly authentic filmmaker in Kevin Smith. Clerks is the simple, and somewhat boring premise that two convienence store clerks that spend a day driving customers away and having only semi-stimulating conversation about their perceptions of the world. But somehow, despite its premise that doesn't seem like movie material, the film really works, and manages to be one of the most eccentric films of this generation. It is also incredible funny, insightful, and just random enough to make up for its slim premise. It also challenges film conventions in a way that many films refuse to do. It doesn't understand the term "politically correct", it challenges formal film conventions, and manages to make a statement without preaching. A truly original work.

87. The Fisher King (1991) - Terry Gilliam has made some incredible films over the years, most of which have been overlooked by the mainstream public. And while 1991's The Fisher King may not be a masterpiece like say Brazil, but it still remains one of his best. and one of the most relatable. The reason The Fisher King works on more levels than some of his more obscure works is that it deftly combines his normally wacky and obscure world with a level of heart and affection that can sometimes be missing from his work. This is mostly thanks to the incredible talents of Jeff Bridges and Robin Williams, their on-screen chemisty and emotionally effective performances add humanity and class to the film making it a heart-wrenching and human film at the same time that it is a showcase for Gilliam's signature style.

86. Ghost (1990)  - One of the most memorable images of film has to be a ghostly Patrick Swayze putting his arms around a young Demi Moore as they mold clay. It is a haunting beautiful image that perfectly portrays why Ghost has remained in the American conscious 22 years since its inception. Hell it has even led to a new Broadway show. At its heart, Ghost is one of the most romantic movies of all time, that is engaging and heart-wrenching. But Ghost has something that most romantic films don't. It also has frightening moments, moments of fear and terror and sadness, along with some heart-pumping action moments, as well as some humor and heart, particularly from Whoopi Goldberg in the role that earned her her well-deserved Oscar. But what really hold the glue of this wild story together is the magnetism and chemistry of its stars, whose love is truly felt by the audience.

85. Barton Fink (1991) - The Coen Brothers finally won an Oscar in 2007 for their terrifying work No Country For Old Men. But throughout the 1990's, the Coens made one great film after another, creating a signature body of work that is quite unlike any others in the American film legacy. 1991's Barton Fink is probably not the most popular of their films, but it is quite possibly one of their best. The story of a writer facing the grueling pain of writer's block may not sound like anything new or original, but with the Coen's dark wit and strangely weird style, combined with affective performances, particularly from John Turturro and John Goodman makes Barton Fink a truly original work that will not be soon forgotten. Most importantly it manages to be just quirky and funny enough to be highly entertaining, slightly awkward, and always effective. A true feat.

84. Leaving Las Vegas (1995) - Nowadays Nicholas Cage's career is one huge joke, making one crappy film after another. This is a sad turn considering the once promising career that he once had, probably peaking with this once in a lifetime performance in Leaving Las Vegas, a role that won him an Oscar no less. Cage wasn't the only won that stole the screen, as Elisabeth Shue was pretty damn fanastic as well, and the brutually honest chemistry that the two share sends firecrackers across the screen, as they traverse the ups and downs of this less-than-feel-good films about suicide, the sideffects of overdrinking, and the depressing twists and turns that life throws at you. This is not a film for the weak at heart, but instead a film for those that don't always seek comfort, but instead liked to be challenged by a film that is not exactly fun to watch, but also thoroughly engaging and one that is worth your time, if you have the guts to endure it.

83. Sleepless in Seattle (1993) -  Sure its kind of cheesy, oh hell its extremely cheesy. Sure it is a manipulative romantic comedy that ends exactly as it is supposed to. But you know what, I dare you to find anyone who doesn't know this film or seen it, and who doesn't get lost in its frames as Meg Ryan and Tom Hanks finally find each other in romantic bliss. Sleepless in Seattle is an effortlessly charming film, mostly due to its leads, whose chemistry is wonderful, and its winding path to love is one of the most effective romances ever depicted on the silver screen. Sure, some will argue that the fact that they don't meet till the final frame is a stunt, but it is a light and effervescent stunt that is easily pulled off with class. Basically, whether the men in the crowd, or the snob critics will admit it, Sleepless in Seattles is an indulgent treat that is extremely satisfying. 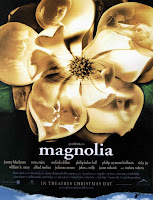 82. Magnolia (1999) - Paul Thomas Anderson is a masterful director whose various stories are some of the most engaging in American cinema, which makes me extremely excited for this year's The Master. His ability to effectively weave a plethora of stories of fascinating characters dealing with crisis, is a reminder of great directors such as Robert Altman. But where Altman sought to find the humor in life, in Magnolia, Anderson pulls out excellent performances, particularly Tom Cruise, and manages to find the psychologically dramatic effect of trauma on a variety of people. It is professionally weaved into a taut story, that despite its length never manages to lose the audience's interest, and also manages to give every character his or her due, and explores depths into the human psyche that few directors are willing to tackle.

81. Rushmore (1998) - The other great Anderson director is Wes Anderson. However, he diverges from PTA's darkness, and instead goes for the quirky, a trend he has continued to this very day. On paper, Rushmore is a coming-of-age story about a young man who is trying to find his own special place in the world while going through prep school. But weird, yet engaging performances from Bill Murray and Jason Schwartzman, and an incredibly funny, well-written, and dry script from Anderson, along with Owen Wilson (yes that Owen Wilson), elevates this film to one of the best comedies of the 1990's and certaintly one of the most memorable. I would also like to note Anderson's use of music. So few films utilize great songs in just the perfect places to capture the emotion, and if they are looking for a template, look no further than the excellent Rushmore.
Posted by Andrew at 10:20 PM