Will Win - Judith Light "Other Desert Cities"
Should Win - Light
Could Win - Linda Edmond "Death of a Salesmen", Celia Keenan-Bolger "Peter and the Starcatcher" 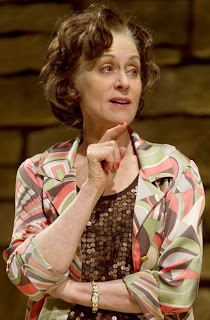 Commentary - After a huge break from Broadway, Judith Light has come back to the front of the theater world with her return last year to the stage with Lombardi, which earned her her first Tony nomination. This year with Other Desert Cities, Light earns her second nomination in a row, and this time around, I think she is the one to beat. Linda Edmond could benefit from the popularity and buzz surrouding Death of a Salesman, the frontrunner for Best Revival of a Play. Also in the race is Celia Keenan-Bolger for the popular Peter and the Starcatcher. Despite her rivals though, Light is definitely the one to beat come next Sunday.
Posted by Andrew at 8:07 PM