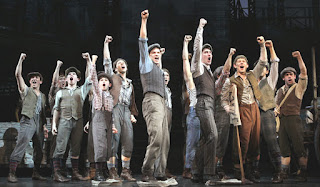 Commentary - While some of the races are runaways, or between one, maybe two people, this one has four legitimate contenders, and is a close one that could go down to the wire. Norm Lewis is the one on the outside that happened to hold his ground against Audra McDonald. I think of the four contenders he is the least likely, although some pundits are betting on him. Danny Burstein has never managed to win a Tony, even though this is his third nomination. I think that he is going to have to wait once again due to some first time nominees who are setting Broadway on fire. Steve Kazee and Jeremy Jordan look like they are going to be the top two to the finish line, and in a close race, I think I am going with Jordan, but Kazee is not far behind.
Posted by Andrew at 3:52 PM