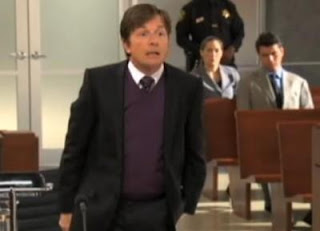 Commentary - Can Michael J. Fox win both the Comedy and Drama Guest acting awards? Probably not, but with Curb Your Enthusiasm and The Good Wife, he is probably taking home another Emmy this year. Although Matthew Perry and to a lesser extent Dylan Baker could try to unseat Fox with friendly fire as all were parts of The Good Wife team this year. Some stand alone contenders stand a good chance of getting in including Chris Messina for Damages, Michael Gambon for Luck, Fred Willard for The Closer, Jeffrey Wright for House and Robert Morse for his recurring role in Mad Men (I know Ben Feldman is listed, but I don't think he has a great shot). Beyond those contenders, several shows offer a plethora of choices, which could hurt their contenders in terms of discerning which ones to pick. Law & Order: SVU once again offers plenty of choices including T.R. Knight, Harry Connick Jr., Treat Williams, Timothy Busfield, and Emmy favorite Andre Braugher, although with so many names there is a good chance that none of them get in. Justified also offers some choices, including last year's nominee Jeremy Davies, Jere Burns and a strong contender in Mykelti Williamson. Dexter also offers some great choices, including Mos Def, Edward James Olmos, and Colin Hanks, but none of them have the bite that John Lithgow had when he won this award. Some legends are also in the race including Ed Asner, Peter Fonda, and James Caan, all of which could get in on name recognition despite not having particularly Emmy favorite vehicles. Finally, if the Television Academy decides to embrace Fringe, which I doubt, then look for Leonard Nimoy, Henry Ian Cusack, and Jared Harris to be in play.
Posted by Andrew at 1:41 PM