Like Crazy, from writer/director Drake Doremus, is  a winding and sad tale of two lovers who face the difficulties of life and reality, as they attempt to hold their relationship together. Anna and Jacob meet and fall in love during their last year in college in California. Anna is a British citizen, whose student visa is set to expire. Instead of leaving at her expiration day, she stays throughout the summer before heading home, and upon returning to the United States she is stopped by Immigration agents, and is promptly sent back. From this initial plotting, we see a story unfolding over the next couple of years, as they travel back and forth to visit each other, they deal with problems associated with long-distance relationships, and long for each other as they move on to other relationships. 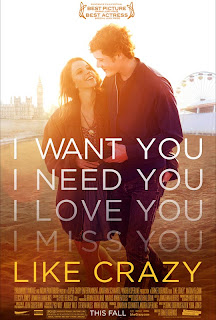 Like Crazy has a lot of wonderful elements, especially the plethora of well-drawn out characters and performances. The two leads are definitely engaging, and truly have an impeccable chemistry between the two. However, it is Felicity Jones that truly shines with her emotional and raw performance that is natural and real, never overacted, striking a perfect tone. Also, in limited roles, the two individuals that Anna and Jacob get involved with, Sam and Simon, are unfortunately underused, because both make the most of their limited roles. Of particular interest is the stunning Jennifer Lawrence who manages to break your heart in a few scenes. She continually shows how she is one of the best young talents in Hollywood. Also, I really enjoyed Alex Kingston and Oliver Muirhead as Anna's parents who bring welcomed humor to an otherwise sad tale.
However, beyond the nice performances, I had some major problems with the direction, the story, and the complete lack of sympathy I feel for these characters after a while. The first half of the film is great, but the last half, with its back and forth nature, and it overuse of "jump-ahead" scenes get incredibly monotonous and repetitive, and despite only being about 90 minutes long, it plods along in its last half and makes it seem so much longer than it acutally is.
Furthermore, I have a hard time sympathizing with these characters after a while. First, the whole situation could have been avoided has she simply gone home when her visa ran out ,and she could have had a more permanent status within a few months, and this whole back and forth would have never had to happen. Plus, by the end these characters become so self-absorbed, that they lead two seemingly wonderful and attractive people on, only to dump them in a heartbeat when they ahve a chance to be together again. Maybe Doremus menat this as a way to show the hardships of moving on, and the lasting connection we have to our first loves, but it makes them seem selfish and incredibly hurtful. Finally, while I sometimes appreciate ambiguous endings, I felt that a more decisive finale would ahve been appropriate considering how long and drawn out this relationship is. I know there was a purpose to it, and I get it (to thwart those that claim that critics "don't get it"), but I didn't feel like it was appropriate considering the rest of the story.

So overall, Like Crazy is not a bad movie, it has some nice moments, and some wonderful moments, especially Felicity Jones and Jennifer Lawrence. But it has some seriously deep flaws, particularly the fact that by the end you have lost all sympathy for what seem like incredibly selfish characters. I can see why some critics and fans have fallen in love with this film: it is easy to get lost in its romantic trappings, but for me, these glaring holes in its cohesiveness and message are too hard to overlook

Oscar Potential: Jones is surely in the Best Actress discussion, but with other breakout performances coming form Elizabeth Olsen and Rooney Mara, she will most likely get lost in the shuffle.