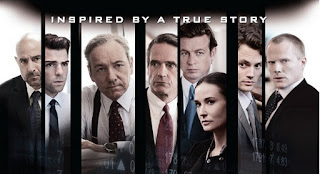 Over the last couple of weeks, I have been hearing the rumblings of a gem of a film called Margin Call. If you look at the cast you would think this would be a huge hit, but it was in limited release and hasn't made much of a mark on the box office. For the record it stars Kevin Spacey, Stanley Tucci, Jeremy Irons, Paul Bettany, Zachary Quinto, Penn Badgley, Demi Moore, Mary McDonnell, and Simon Baker. Despite its intial buzz, recently the blogosphere and pundits have begun to rumble about the possibility of some award recogniton particularly in the Supporting Actor and Original Screenplay. Stanley Tucci and Kevin Spacey in particular are names being thrown around, Tucci getting the most talk as serious supporting contenders, and first time director/writer J.C. Chandor could get into Original Screenplay if he gets some precursors. I currently put Tucci in my predictions, because I am still not sure about Kenneth Branagh (It's all about Williams), and there really is some room for a respectable and well-liked actor like Tucci or Spacey. This of course could all be a waste of breath, but for now, just make sure you keep this one on your radar.
Posted by Andrew at 10:07 PM