Other Contenders - My Week With Marilyn, We Bought a Zoo, Carnage, 50/50, The Hangover Part II, Rango, The Rum Diary, Crazy Stupid Love, Beginners, The Muppets, Tower Heist, Win Win, Footloose
Commentary - With the recently announced news that The Help was campaigning in the Comedy/Musical category that has shifted my initial thoughts. I think that it could have racked up nods in the Drama category, but maybe being in the C/M category guarantees the film and Davis a win, to push forward towards Oscar glory. Of course the HFPA can decide to put it where it chooses, and in its infinite wisdom it may put it back where it belongs. That being said, it enters an already stacked race with a lot of great contenders. Young Adult is Jason Reitman's latest, and it is getting good reviews. Some think it is not in the Best Picture race at the Oscars, but I think we all can agree it's in here. Midnight in Paris is probably the frontrunner, considering it is Woody's comeback, and a huge summer hit (for its release it was). They gave it to Vicky Cristina Barcelona, why not an even better film? The Artist is a film, like The Help which could go either way. It is mostly music, but not a musical. It is lighthearted, but not an outright comedy, so while I think they will place it here, I could see it going to the Drama category, once again throwing this category for a loop. Finally, I am going with the biggest comedy of the year, Bridemaids. It is right up the Globes alley, big comedy, big stars, lots of positive feedback, and it allows them to be populist without having terrible nominations. If for some reason The Artist and The Help get put elsewhere, watch out for: Carnage, Crazy Stupid Love, My Week With Marilyn, 50/50, The Muppets, and We Bought a Zoo. Also, I know its crazy to think this, but the Globes love musicals, so yes, Footloose could surprise here. 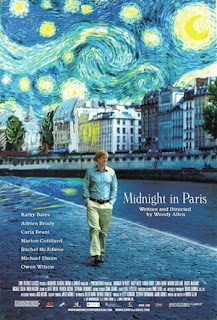 Best Actor - Comedy/Musical
Steve Carell "Crazy, Stupid Love"
Johnny Depp "The Rum Diary"
Jean Dujardin "The Artist"
Joseph Gordon-Levitt "50/50"
Owen Wilson "Midnight in Paris"
Other Contenders - Matt Damon "We Bought a Zoo", Christoph Waltz "Carnage", John C. Reilly "Carnage", Paul Giamatti "Win Win", Tom Hanks "Larry Crowne", Ewan McGregor "Beginners", Eddie Murphy "Tower Heist", Robert Downey Jr. "Sherlock Holmes: A Game of Shadows", Eddie Redmayne "My Week With Marilyn", Johnny Depp "Pirates of the Caribbean: On Stranger Tides"
Commentary - Thre are so many deserving performances that I think will be left out like the Carnage fellows, and Paul Giamatti, but both are small films that will have to have a good amount of HFPA support to break the barrier over bigger names. That being said, performances like Jean Dujardin, Joseph Gordon-Levitt, and Owen Wilson all from great films, are certaintly great choices, and I think are the frontrunner for the win. Steve Carell is also in the mix, with his funny and touching performance in Crazy Stupid Love. Finally, I am going with a typical Globes choice. The Rum Diary was less than stellar to say the least, but they love Johnny Depp, and Pirates seems to have worn thin. So my guess is that instead of rewarding a far superior performance and movie, they will bring Depp to the Globes, yet again.
Best Actress - Comedy/Musical
Berenice Bojo "The Artist"
Viola Davis "The Help"
Charlize Theron "Young Adult"
Michelle Williams "My Week With Marilyn"
Kristen Wiig "Bridesmaids" Commentary - Now this trult is a competitive category, with tons of Oscar contenders vying. Since The Help could go here, Viola Davis is in, as is the brazen performance of Charlize Theron in Young Adult. Both are currently in my predictions for the Oscars. As is the wonderful Michelle Williams, who managed a surprise nod for Blue Valentine and is sure to get in for this high profile piece. Kristen Wiig is actually vulnerable, but I think that the pure power of Bridesmaids will be enough to get her and Melissa McCarthy in. Finally I think that a supporting performance in Berenice Bojo, will get enough votes to bump up to Lead for the Globes. This is a common occurence, but it is just as likely she gets the Supporting nod instead.
Posted by Andrew at 10:00 AM