As I expected, Cloud Atlas, which has just premeired at TIFF, is already dividing critics, as either a masterpiece or a mess. I am not sure what to think, because it also received a ten minute standing ovation after its premeire. But in the end, it will probably be more positive than negative, and will definitely be in play for at least some technical nods at the Oscars.

"I can tell you this:  we'll definitely be running a Second Look piece about this film after it's in theaters, because it is a remarkable movie experience, one that cannot be digested easily, and any attempt to dig in fully would rob you of the sense of discovery that washed over me as I sat in the theater."

Henry Barnes at The Guardian (UK) was not so enthusiastic:

"At 163 minutes Cloud Atlas carries all the marks of a giant folly, and those unfamiliar with the book will be baffled. Yet it's hard to wholly condemn the directors' ambition - this is fast-paced and cleverly assembled, with the best of the performances shining through the prosthetics (Hugh Grant makes great play of the clutch of villains he's dealt). The Tykwer/Wachowski collective offer everything here. Chances are there's something in the hodgepodge for you." 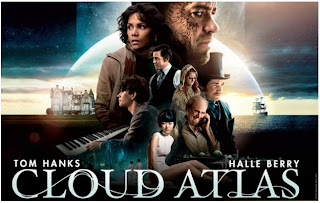 "An intense three-hour mental workout rewarded with a big emotional payoff, "Cloud Atlas" suggests that all human experience is connected in the pursuit of freedom, art and love. As inventive narratives go, there's outside the box, and then there's pioneering another dimension entirely, and this massive, independently financed collaboration among Tom Tykwer and Wachowski siblings Lana and Andy courageously attempts the latter, interlacing six seemingly unrelated stories in such a way that parallels erupt like cherry bombs in the imagination. The R-rated epic should find a substantial audience when Warner Bros. releases it Oct. 26, assuming critics don't kill it in the cradle."

But it is Scott Feinberg of THR's analysis that I appreciate the most:

"I can't say that I loved the sum of its parts, but I was still blown away by many of the parts themselves -- the performances (although it's hard to single any one or two people out when everyone had so much to do), the editing (by master juggler Alexander Berner), art direction/production design (who must have felt like they were responsible for many movies), visual effects (coordinated by a team of over 100 people), especially the makeup (anyone that can make Hanks look like himself in Castaway, Mike Myers in Austin Powers, Russell Crowe in Gladiator, and Elton John, all in one film, deserves heaps of praise). I suspect that Oscar voters will feel similarly."
Posted by Andrew at 1:07 PM