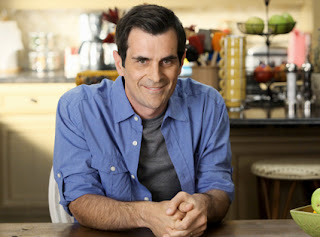 Commentary - Once again, this is a tough race, between three co-stars. I would love to see Ed O'Neil win for Modern Family, but his tapes are just not going to stand out. I would be even happier if Max Greenfield won, but I fear his Schmidt is just a little too out there for older Emmy voters. So really it comes down to the other three Modern Family guys. Jesse Tyler Ferguson had a great season, and was my initial pick, but I think that Eric and Ty are simply just funnier. Eric is probably the best choice if you only look at episode submissions. His is by far the funniest of the actual submissions, especially compared to Ty's annoying tape. But if you watch all four, and look at each performance within all of the tapes, which Emmy voters are not supposed to do, but when you have so many from the same show its hard not to, Burrell is overall the best performer of the four tapes, as the other three submissions are great for him. This is one that might change to Stonestreet in my final list, but at the moment I think Burrell will repeat.
Posted by Andrew at 9:19 PM